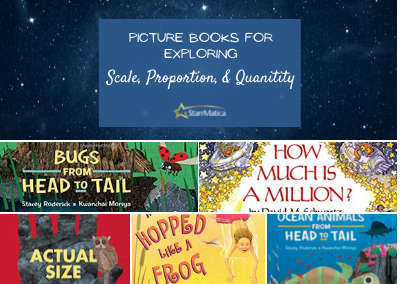 The picture books shared below are fantastic for examining the crosscutting concept of Scale, Proportion, and Quantity.  Whether you are reading them aloud, having students explore them in small groups, or having students read them independently, the following questions can be used to help students focus on scale, proportion, and quantity: 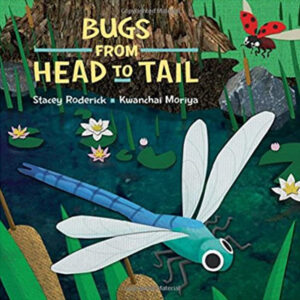 Stacey Roderick’s From Head to Tail texts are a series that seems specifically designed for an exploration of scale with younger students. The illustration are key to these texts which ask students to predict what animal a certain body part belongs to. The body part is first shown at a larger “close up” scale before being shown as part of the larger animal. The series includes: 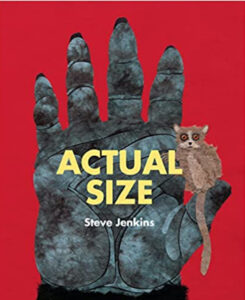 Actual Size by Steve Jenkins is one of my favorites for discussions about scale because of the concrete way the illustrations allow students to view parts of animals in their actual size.  This book is sure to inspire students to create projects that show the “actual size” of animals not included in the book.  An interesting cross-curricular connection to Social Studies can be made by using this interactive map to explore the “actual size” of countries around the world.

If You Hopped Like a Frog by David Schwartz makes a discussion of proportion accessible for all students.  The amusing illustrations engage students in imagining what they could do if they had abilities proportional to those in the animal kingdom.  For example, if you were as strong as an ant, you could lift a car! 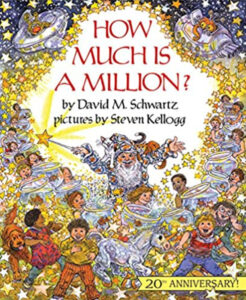 How Much is A Million by Steven Kellogg is a classic picture book that helps students to understand the quantity of one million by showing what one million means in different contexts – such as students standing on each others’ shoulders or the amount of time it would take to count to one million. 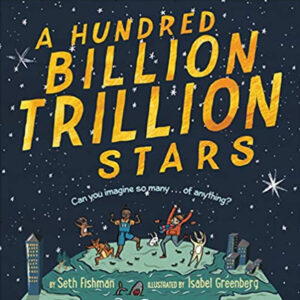 A Hundred Billion Trillion Stars by Seth Fishman is another picture book for exploring quantity.  While it doesn’t lend itself to helping students understand really large numbers, it does get them to think about large quantities.  And it could be used as a launching pad for thinking about how almost everything in the world can be measured and quantified in multiple ways.  For example, how many different ways can you measure an ant?  How can you use a proportional relationship to compare your measurements to another object?

If you are a StarrMatica Texts: Science Your Way subscriber, you can check out the texts below that align with an exploration of sale, proportion, and quantity. Remember, each 1st – 5th grade text has multiple reading levels so all of your students can read the same content independently.