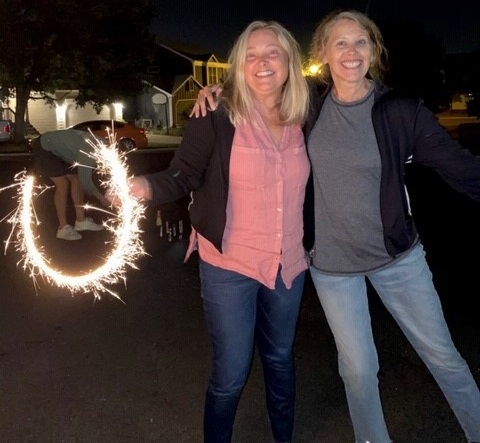 I’m on the left in this photo. The person on the right is my sister, Elizabeth Baldwin. She also writes for StarrMatica!

Hello! I am Michelle Negron Bueno, and I love writing for StarrMatica!

From a young age, I have been enthralled with stories. It comes as no surprise that many years later, my whole life surrounds reading and writing. I was born and lived for many years in Spain, a place extremely rich with history. I also lived in Germany where I went to boarding school. Years later, after reading the Harry Potter series, I would remember how lucky I was to attend boarding school, but would also wish it could have been Hogwarts. I would have loved to have learned magic and known Professor Dumbledore!

In college, I studied anthropology. I wanted to discover stories from both the ancient past, as well as cultures in the present. In the years after college, my love for writing merged with my passion to make the world a better place. I joined the communications department of a non-profit organization specializing in community development in El Salvador, where I had moved to a few months after getting married. I began to write stories of people living in extremely poor communities and how they were courageously and creatively changing their lives.

During my time in Central America, where El Salvador is located, I raised three children who are now both Salvadoran and from the United States. In El Salvador, I also wrote for magazines and began to write stories of my own. Eventually, I completed a Master of Fine Arts in Creative Writing and Children’s Literature from Hollins University.

While I was at Hollins, I learned about StarrMatica. I began to write fiction stories for StarrMatica at first and then began to write both science and social studies texts. While I did not think I was particularly good at science growing up, I found with research and a little help from experts, I could learn amazing things! I also found writing both fiction and nonfiction was still all about stories.

Even though I still work as the Head of Communications for the same nonprofit and am a writer for StarrMatica, I continue to research and write my own stories. My current project is a novel taking place in El Salvador in what is known as the Balsam Coast in the 1930s. The main character is a young woman who is both Maya-Pipil (two indigenous groups who still live in Central America today) and a descendent of the renowned profiteer, Sir Francis Drake, who spent time in the Balsam Coast region while on his voyages around the world.

I love that no matter where my life takes me, whether a new country or a new job, I can always read, write and discover new stories. It is what makes my life always new and always fascinating.